This has been, so far, a very chaotic year.
Its not even finished yet.
Earthquakes, volcanoes, on going wars.
There have been many rumors of war from all over this globe.
The flooding and droughts have also been world wide.
Last year, I felt, was a crazy twelve months.
The financial market was haywire, and the "flu pandemic" on everyone's mind.
This year has been more insane than last.
Just this month of September, there have been many broadcast shootings.
This past week there were 3.
These were only the ones advertised on the national news.
Who knows how many there actually were.
Earlier in the year there were two incidents of private planes purposely being crashed in to federal buildings.
There have been many UFO reports.
Now there are retired military officials coming out and telling us about it.
Just think about the earthquakes this year that did substantial damage.
Chile, Haiti, New Zealand, these are the ones that got the most advertisement because.
Wheat and grain has already doubled on the market.
This year is not even over yet.
There was an article not too long ago, mentioning an October surprise.
Just a few more days to see what that may or may not be.
While listening to the stock channel, they mentioned a drop of nine thousand points.
Just in May, the market took 15 minutes to drop over one thousand points.
With the price of gold soaring over thirteen hundred, it might be a good time to store some reserves.
Remember Icelands' volcano erutpion?
How that disrupted the area.
That was only one.
There have been many more.
So much has happened this year, it is hard to keep track.
It still has three more months to go.
I should get a new cushion for my seat on the watchtower, this one's getting a little worn!

Founder Comment by Cyprium on September 28, 2010 at 5:47pm
The "October surprise" makes me curious....such a wide variety of people have mentioned having strong gut instincts or Intel or even visions which point to some dramatic shift in the way things are.

There are serious indications pointing to a ramped up effort to get people to accept aliens into their world view. I'm not sure if this means anything like full disclosure as soon as next month..i think the public hasn't been prepped enough for that..but i could see it becoming a subject pushed in a much more extreme and direct way.

Fox News airing a story of UN ambassadors to aliens is quite a milestone. It was retracted of course..and i wouldn't expect anything else..they were testing the waters of public reaction. We haven't seen the last of that though...keep watching...and keep a soft cushion on your seat.

Admin Comment by Prodigal Son on September 29, 2010 at 7:33pm
"The elite are also using scalar weaponary to accelerate the destruction of arable land so that they can destroy humans. This is expected so it is not so shocking to us."

It is indeed true that weather manipulating technology is being used to increase destructive weather patterns. it is not shocking that it is the case, but perhaps somewhat shocking that few seem to notice it.

It might be reasonable to consider that those involved with such incidents as those who flew planes into buildings were perhaps not even involved in the events as at least one incident found no body with the plane, but the plane targeted the building in a manner it would if being controlled remotely by gps. i am not certain the elite want the populace armed at all. they have shown a very consistent pattern of disarming civilians before conquering them. they understand that the guns the average citizen owns are not aimed at their countrymen, but at them.

""Many U.F.O sightings".
These are probably our own aircraft with alien technology copied from the U.F.O's that landed at Roswell.There might also be a conflict going on right now between black ops and alien U.F.O's."

True, militaries of many governments have back engineered crafts to produce their own. there are still craft which make appearances which are not military retro engineered though. as this technology was first introduced to mankind by fallen angelic beings, they are still the origin of it. it might very well be that there will come a public introduction of those beings to the world as "aliens", which much of the public will accept as true, being prepared beforehand by such appearances of craft as we hear of now.

Those who know should have the courage to come forward, whatever their position may be, but perhaps for those without YHWH, they have much to fear. He is the only protection there is against what the system would do to those who rebelled against it.

"The same frog/toad is being slowly boiled alive in the same cauldron used by the elite witches. What's new?"

True, the pot is boiled slowly, but even a slow change is still a change. in this way, by a process of incremental conditioning, people are kept unaware of the changes. a more rapid change would result in a great awakening if it came at a point prior to when the enemy is fully prepared to deal with it. Ordo ab Chao is the motto of elite. Order from chaos. a little chaos one step at a time to remove one freedom at a time, one critical societal component at a time until there is nothing left but entire dependency upon their system.

There will come a point of complete dependence at which time they may use whatever final means of dramatic chaos to bring in their pseudo messiah and establish their short lived vision of their new world order. it will only remain a few short years though and then we may look forward to peace with our Savior forever after.

We should always remain ready and watchful, as scripture states that many in the time near His coming would become weary of doing so and say:

""Where is the promise of His coming? For since the fathers fell asleep all things continue as from the beginning of creation." For this they willfully forget, that by the word of Yahuwah the skies were of old and the earth standing out of water and in the water, by which the world then existing perished, being flooded with water." 2 Peter 3:4-6

We are assured this story ends well for us, and not for the enemy. let us keep faith stored up for the day of trial.

Admin Comment by Bean on September 30, 2010 at 12:00am
the increase in chaos over the past 3 years seems to, on a conscious level at least, escape most.. ask someone though to recall how life was in, like, '06, and compare it to the years since then.. you will probably be answered with a confirmation of the subconscious awareness that yes, since that time, life has become more tedious and more difficult all-around.

there is no covering the fact that adversity has exponentially increased in the past few years.. whether from internal deterioration or external destruction.. that chaos.. that panic.. has been succeeding at working people into a more and more severe state of susceptibility to suggestion, aimed ultimately in the direction of accepting the anti-Christ as the Messiah.

i think this October, particularly, could be different than others, and i think this next 12 months could witness a major shift in the mindset of society and the condition of the world as a result of the implementation or execution of some sinister something this coming month.. it is, after all, a month special to the enemy..

perhaps something will happen and go unreported even.. and continue to increase under the surface until the herd is fully primed to accept something like full 'alien' disclosure

"There will come a point of complete dependence at which time they may use whatever final means of dramatic chaos to bring in their pseudo messiah and establish their short lived vision of their new world order."

"..the term chaos has been adopted.. as referring to the primordial state before creation, strictly combining two separate notions of primordial waters or a primordial darkness from which a new order emerges.."

"Ordo ab Chao is the motto of elite. Order from chaos. a little chaos one step at a time to remove one freedom at a time.."

"In Greek mythology, the Giants were the children of Gaia.."

"Mimas was one of the Gigantes of Greek mythology. Like the other giant sons of Gaia, Mimas had serpents for legs and was born fully armoured." 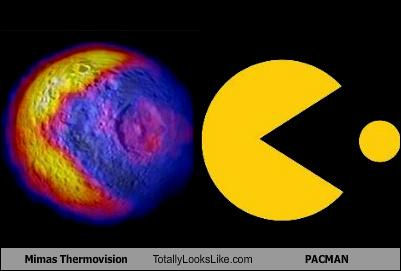 designs for the 'new world order' hit the pavement in the Garden of Eden about 6,000 years ago.. amazing that it will take only an instant at Messiah's return to destroy those plans.

Founder Comment by Cyprium on September 30, 2010 at 5:21pm
I think generally it's easier to see things as going more slowly if you are in a place or situation that has not yet been drastically affected by one of these events. That's the case for a lot of Americans...who are largely concerned with their social circles...sports events and Hollywood stars...who have not yet had incomes deteriorate or been the victim of abuses of state power personally. Those who are not yet affected are being dragged in one by one though into a scene in the US which has dramatically changed from a place where people really became complacent to a place where that luxury is fast becoming a fatal error.

Admin Comment by Prodigal Son on October 1, 2010 at 6:23pm
"@Prodigal Son. "it will only remain a few short years". I always thought that the Trib has chaos with new world order rules for the first 1260 days followed by absolute chaos for the remaining 1260 days.
Do you say "few" as in a couple (2) years? or is your "few" the 7 years Tribulation?"


i use "a few" to mean the entire tribulation period, not simply two years. Perhaps seven years is a very few as compared to 1,000, or an eternity.

What a way to start 2011. We're only 3 days in to this year, and already have had two 7.0+ earthquakes in South America. Flooding that has been labeled "biblical" in Australia. And now strange species die offs in one state.

"– If you're thinking of moving to Arkansas, hold off a bit. The state, reeling from the chilling sight of 10,000 blackbirds dropping dead  from the sky last week, is now grappling with 100,000 fish that have washed up on a 20-mile stretch of the Arkansas River. Officials suspect disease killed the drum fish about 125 miles northwest of Little Rock. Fish die-offs aren't unusual, but the size of this one is."

May have to find something secure to hold on it. It could turn out to be a very interesting year.

Admin Comment by Prodigal Son on January 4, 2011 at 4:52pm
it would seem that Arkansas is being targeted for some reason. Perhaps only a testing ground for HAARP experiments. This may become a very eventful year as we approach 2012 and the goal becomes convincing the masses that we are entering a new age.

Comment by Kathy on February 2, 2011 at 2:25pm
One month of this year is already behind us. Yet the headlines have not let up. From flooding and huge cyclones in Austrailia, to riots in Egypt, to historic storms here in the United States. Just to name a few that have caught headlines. There have been many more.

Imagine what hasn't been advertised.