While watching the Weather Channel to catch my local forecast for the day. A bright, loud commercial came on. The background, a clean well watered corn field with sunshine and warm comfortable temperatures. A man with a little girl, that was told to be his daughter sitting on his shoulders. As the commercial ran, it was for High Fructose Corn Syrup. It is now to be called Corn Sugar. The commercial had a feel of comforting and trust.

"If high fructose corn syrup is simply sugar made from corn, why don't you just call it corn sugar?"  Why not? Because it is not. 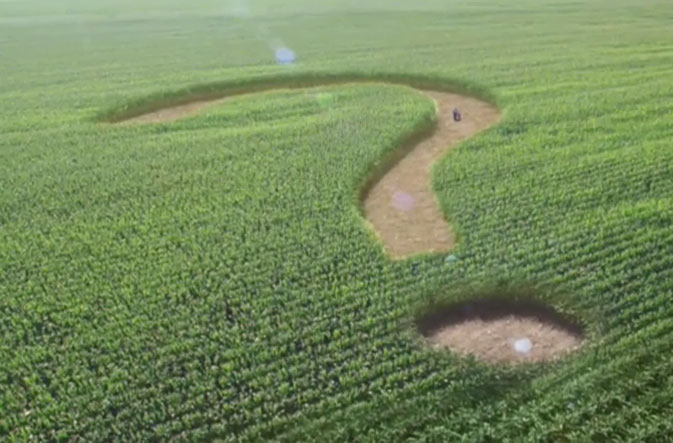 I found it amusing that the web site used a puesdo crop circle.

While doing your grocery shopping, Please be aware that if you are trying to avoid HFCS, you also need to avoid products that have corn sugar. If high fructose corn syrup was just fine and just like cane sugar, there wouldn't be so many products advertising it is not in their product.

The web site that the commercial was directing you to is http://www.cornsugar.com/. The site looks clean and is easy to read, with many quotes from so called professionals. It gives you information like

A lot of misinformation. Know that this website is endorsed by the corn refiners association. Which I doubt they have my best interests in mind.

I've seen those commercials before. They Truely give me the creeps...warm, cloyingly sweet. A turd wrapped in a blanket still stinks...

According to a Mainstream study... 9 out of 20 samples of HFCS have tested positive for containing mercury. It always comes down to something that damages brain function when you see an overload of an ingredient and advertising for it on the market. Of course we also know that better than 80 percent of the corn crop produced in the US is genetically modified and certainly they aren't seeking out that lonely 20 percent of clean corn to make this crap.

Another ingredient you see absolutely Everywhere is soy, and you can't get away from that by trying to only buy organic or health food products as soy is generally still believed by most to be good, healthy people food. Soy...even at its best, is not an edible plant. Containing chemicals which mimic estrogen, it not only throws the endocrine system out of whack but tends to damage male fertility and even can cause secondary feminizing. Soy also interferes with proper brain function...and is another crop which is almost entirely gmo in the US. Read food labels and see how next to impossible it can be to avoid soy....

High-fructose corn syrup, a ubiquitous ingredient present in processed foods and sugary beverages across the globe, is a well-known health destroyer with ties to conditions like metabolic damage and cancer. Now, scientists have revealed that the substance — oftentimes genetically modified — may also be damaging the brain functions of consumers worldwide.

“Our findings illustrate that what you eat affects how you think,” stated  professor of neurosurgery Fernando Gomez-Pinilla, from the David Geffen School of Medicine at UCLA.

The findings should come as no surprise, given that it has previously been revealed that high-fructose corn syrup oftentimes contains the toxic heavy metal mercury. Mercury, of course, is highly dangerous and can cause serious complications with biological function — particularly when exposed to the substance on a daily basis through food intake and other sources (CFL light bulbs, amalgam fillings).

Despite the negative effects of high-fructose corn syrup on the brain, the scientists also found that there are natural solutions that can help to minimize and negate the damage. Scientists found that omega 3′s helped to fortify the brain after observing the results of feeding both flaxseed oil and DHA to the study rats. The scientists found that the omega 3′s were helpful in aiding the ability of brain cells to transmit signals to one another. As a result, memory and total mental ability is improved.

It is continually being found that high-fructose corn syrup is highly toxic to the human body, and is absolutely unfit for consumption. There is simply no reason why the ingredient should exist within the food supply, other than to save companies money.