TN floods wipe out farmers' crops
By Getahn Ward • THE TENNESSEAN • May 4, 2010
Just weeks after planting 260 acres of corn, farmer Danny Rochelle expects a total loss after the Duck River flooded his farm last weekend.
"It's all under about 20 to 30 feet of water," said Rochelle, who estimates a cost of at least $30,000 to replant and fertilize a new corn crop at his farm near Centerville in Hickman County.
Farmers statewide are counting costs of the flood that brought rain at levels that occur only once in a thousand years to roughly two-thirds of Tennessee's 95 counties. "There's no one alive in Tennessee today that has seen a storm of this magnitude," said Kevin Brown, state conservationist for the U.S. Department of Agriculture's Natural Resources Conservation Service.
Corn planted last month, wheat planted last fall and expected to be harvested next month, and soybeans whose planting season just began face the biggest risks, depending on how long the water remains.
http://www.tennessean.com/article/20100504/BUSINESS01/5040345/TN-fl...

Permalink Reply by Kathy on July 27, 2010 at 4:12pm
Three-quarters of China's provinces have been plagued by flooding and 25 rivers have seen record-high water levels, the Flood Prevention Agency said.
Flooding this year has overwhelmed reservoirs, swamped towns and cities, and caused landslides that have smothered communities, including toppling 680,000 houses, Xinhua reported.
The water level in the massive Three Gorges Dam - the world's largest hydroelectric project which was also built to end centuries of floods along the Yangtze River basin - hit its highest level ever last week.
http://www.dailymail.co.uk/news/article-1298015/China-landslide-lea...

AdminPermalink Reply by Bean on July 29, 2010 at 5:36pm
July 29 2010 "Hundreds of people are feared dead and thousands more are stranded after monsoon rains caused widespread flooding in Pakistan." reports Aljazeera.net 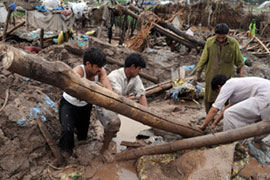 " "The scale of the devastation is so large that I don't think that even at the provincial level they will be able to cope with the efforts" - Muhammed Ateeb Siddiqui, Pakistani Red Crescent"

"A newly constructed part of a dam in the Charsadda district collapsed and crops have been destroyed by the raging waters, according to officials.".. sounds like another manufactured disaster. 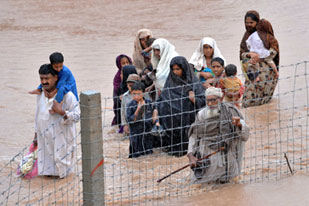 "Al Jazeera's Kamal Hyder, reporting from Pakistan's capital, Islamabad, said that an emergency situation was developing in the country. "The rain is not stopping, many bridges have been washed away and there are reports that 100-year records are being broken." "

"About 70 people were killed in flash floods in the southwestern Baluchistan province last week, which also uprooted nearly 100,000 people."

Permalink Reply by Kathy on August 29, 2010 at 3:33pm
Millions at risk as crops fail in central Africa
After years of drought, flash floods have destroyed harvests in Niger
By Andrew Johnson

Hundreds of thousands of children across central Africa are at risk of death from starvation and disease after flash flooding worsened an already chronic humanitarian crisis caused by drought.
Aid agencies warned yesterday that 10 million people are already facing severe food shortages, particularly in the landlocked countries of Chad and Niger, after a drought led to the failure of last year's crops. As many as 400,000 children are at risk of dying from starvation in Niger alone, according to Save the Children.
http://www.independent.co.uk/news/world/africa/millions-at-risk-as-...

The country lost 2.39 million metric tons of rice and 10.4 million tons of standing sugar cane, the minister said in an interview today in Islamabad. The nation may also import 2.8 million bales of cotton, he said.

By ripping out crops, stores and 4,000 kilometers of roads, the floods boosted food prices and may push annual inflation to 20 percent, according to Prime Minister Yousuf Raza Gilani. The inundations affected 20 million people, killing more than 1,800 and damaging 1.9 million homes, the government said. The losses helped push rice in Chicago to the highest level since May and boosted cotton to the most expensive in 15 years in New York.
http://www.businessweek.com/news/2010-09-28/pakistan-floods-destroy...

A month of heavy rains in Benin has killed 46 people, left 150,000 without homes and affected key harvests of rice, sorghum and corn, the country’s Interior Minister said.

Almost 400 people have been killed and 1.8 million affected by floods in Central and West Africa this year, the United Nations said Oct. 26.

Thousands in Togo, which neighbors Benin, were displaced last month after the Mono River overflowed its banks. At least 17 people were killed in northern Ghana in September after Burkina Faso released water from dams into tributaries of the Volta River, which runs through both nations.

The Dawson River in the central Queensland town of Theodore has started falling after peaking yesterday.

By JIM SUHR and JIM SALTER


Missouri River floods this summer caused an estimated $207 million in lost crop sales and related economic activity in six western Iowa counties that border the river, according to a new study commissioned by the Iowa Farm Bureau Federation.


NASA: it rained so hard the oceans fell


According to this NASA report, worldwide rainfall and snowfall were so extreme, in so many places last year, that sea levels fell dramatically.

Here in Truro, Cornwall, SW England the BBC has forecast thunder and lightning for this coming Wednesday.

Even last night there was a storm that knocked out the electrical grid in Redruth, 10 miles away.

What is weird is that its early spring. Storms like this were rare even during the hottest month on July, some 20-30 years ago.

Now more lightning is forecast for this coming Wednesday. 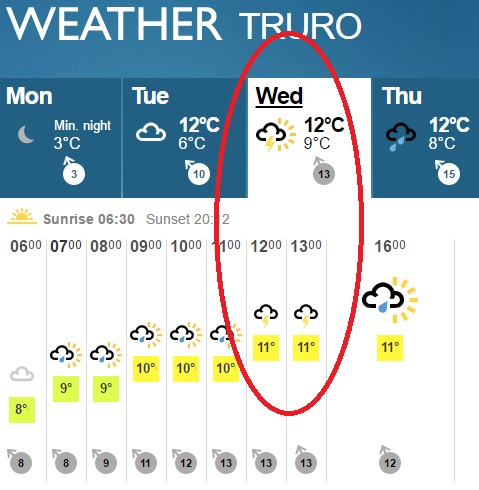 i am not sure if this is just as spiritually bad as the Bel one.