Elohim's existence demonstrated and proven on the physical plane.

Energy has always existed, the law of energy conservation proves this. Edwin Hubble proved in the 1940's the universe hasn't always existed. So if the only thing that existed before the universe was energy, that Energy is logically the cause to the effect of the creation of the universe. The Energy is the legendary "First Cause". The reason why this is, obviously, is because nothing else existed other than the Energy.

It's reasonable to conclude that the Eternal Energy has intelligence. Rather super intelligence. And the creation of the universe was a premeditated act. Nothing that has been created exists of itself (Colossians 1:17). According to science, and St. Paul's writings in Colossians the Eternal Energy holds all creation together. Everything comes from the Source of the Universe's Energy, and that Source holds the universe together. The universe was designed, by the Energy. Anything that functions for a purpose, and has reason behind it was designed. The laws of physics were set, designed. Rich Deem puts it quite elegantly " The laws of physics must have values very close to those observed or the universe does not work "well enough" to support life. What happens when we vary the constants? The strong nuclear force (which holds atoms together) has a value such that when the two hydrogen atoms fuse, 0.7% of the mass is converted into energy. If the value were 0.6% then a proton could not bond to a neutron, and the universe would consist only of hydrogen. If the value were 0.8%, then fusion would happen so readily that no hydrogen would have survived from the Big Bang. Other constants must be fine-tuned to an even more stringent degree. The cosmic microwave background varies by one part in 100,000. If this factor were slightly smaller, the universe would exist only as a collection of diffuse gas, since no stars or galaxies could ever form. If this factor were slightly larger, the universe would consist solely of large black holes. Likewise, the ratio of electrons to protons cannot vary by more than 1 part in 1037 or else electromagnetic interactions would prevent chemical reactions. In addition, if the ratio of the electromagnetic force constant to the gravitational constant were greater by more than 1 part in 1040, then electromagnetism would dominate gravity, preventing the formation of stars and galaxies. If the expansion rate of universe were 1 part in 1055 less than what it is, then the universe would have already collapsed. The most recently discovered physical law, the cosmological constant or dark energy, is the closest to zero of all the physical constants. In fact, a change of only 1 part in 10120 would completely negate the effect." Mr. Deem goes on to demonstrate "
"Unlikely things happen all the time." This is the mantra of the anti-design movement. However, there is an absolute physical limit for improbable events to happen in our universe. The universe contains only 1080 baryons and has only been around for 13.7 billion years (1018 sec). Since the smallest unit of time is Planck time (10-45 sec), the lowest probability event that can ever happen in the history of the universe is:

So, although it would be possible that one or two constants might require unusual fine-tuning by chance, it would be virtually impossible that all of them would require such fine-tuning. Some physicists have indicated that any of a number of different physical laws would be compatible with our present universe. However, it is not just the current state of the universe that must be compatible with the physical laws. Even more stringent are the initial conditions of the universe, since even minor deviations would have completely disrupted the process. For example, adding a grain of sand to the weight of the universe now would have no effect. However, adding even this small amount of weight at the beginning of the universe would have resulted in its collapse early in its history."

These facts prove that the Eternal Energy is Super Intelligent. Now an Eternal Super-Intelligent force has been demonstrated and proven to exist even on the physical plane. What would one call a Eternally Super-Intelligence that was the Cause to the Big Bang or creation of the universe? God.

Joshua 24:15 - "If it is disagreeable in your sight to serve YHWH, choose for yourselves today whom you will serve: whether the gods which your fathers served which were beyond the River, or the gods of the Amorites in whose land you are living; but as for me and my house, we will serve YHWH."

Very good post Matthew, thank you for adding it. The improbability, i would even say impossibility, of a creation without a Creator is as self evident as realizing that a house, a vehicle or a painting did not occur without someone having designed them. What faith in fantasy it requires to believe in an accidental creation.

"For since the creation of the world His invisible attributes are clearly seen, being understood by the things that are made, even His eternal power and divinity, so that they are without excuse, because, although they knew Yahuwah, they did not magnify Him as 'Eloah, nor were thankful, but became futile in their thoughts, and their foolish hearts were darkened. Professing to be wise, they became fools" - Romans 1:20-22

The faith we have is not faith in the existence of a Creator. That fact is obvious, and can be proven so it doesnt require faith to understand. The faith I have is faith that Yah is Good, and will make good on His promises. 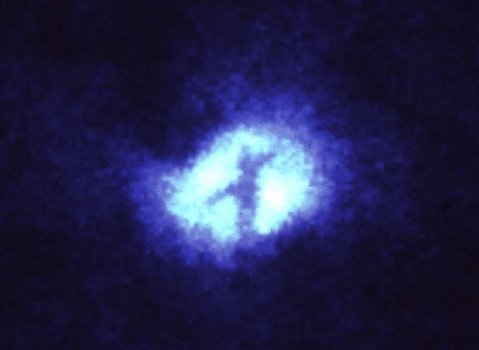 electron microscope image of Laminin.. a type of protein which functions as the 'glue' which holds cells and tissue together..

cause and effect can be proven over and over.. random activity has never once been proven.. and luck is a poorly misunderstood myth..

1st law of thermodynamics 'energy can neither be created nor destroyed. it can only change forms.'

i'm not much of an Einstein fan but he did get the 'matter = energy' part right at least..

comedian Bill Hicks gives a better explanation in '..all matter is merely energy condensed to a slow vibration..'

'The laws of physics were set, designed.' - and so amazingly perfect.. numbers don't lie.. and when everything has a numerical value - there is absolute truth..

'Astronomical Enoch' anyone? The Book of the Courses of the Heavenly Luminaries


The faith we have is not faith in the existence of a Creator. That fact is obvious, and can be proven so it doesnt require faith to understand. The faith I have is faith that Yah is Good, and will make good on His promises.

Right... knowing that a Creator exists really doesn't take faith, it only takes a little common sense. Trusting that He is Who He says He is...that's our faith.

I hope I dont come across as rude. I do pray that everyone will one day accept reality. The scripture teaches that eventually all knees will bow to Him, but perhaps the scripture can also give some insight on why atheists do not harbor enough common sense to conclude the existence of a Designer. Atheists demonstrate daily that they are capable of vast amounts of pure blind faith (based on EVERY atheist's blind faith in abiogenesis, something that has never been observed, something that is pure myth) but why the lack of common sense? Lets take a look.

Psalms 14:1 - The fool has said in his heart, "There is no Elohim." They are corrupt, they have committed abominable deeds; There is no one who does good.

Psalms 111:10 - The fear of YHWH is the beginning of wisdom; A good understanding have all those who do His commandments; His praise endures forever.

These two verse alone suggest these people can't be wise, and are fools, which helps me understand why they can't grasp simple concepts such as any creation requires a creator. But any christian should still treat them with love according to the teachings of the Master Yahushua.