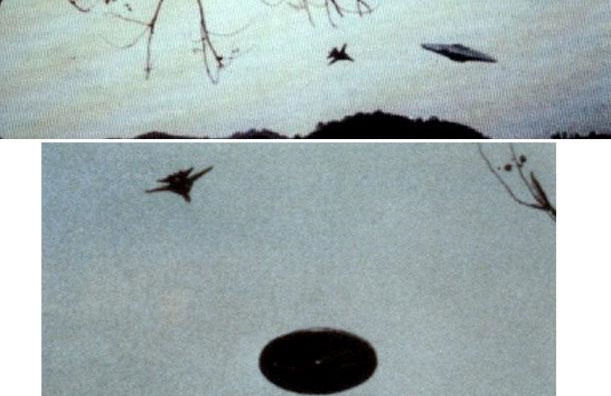 This image has been part of the UFO Photo Album for a while now.  The photos were taken by Amaury Rivera Toro in 1988, in Puerto Rico.  This video and the following article by Aileen Gourette give some background on the event.

I met Amaury Rivera Toro at the International UFO Congress in Las Vegas. He was too frightened to speak but he endeavored. His story is very unusual. This is his story in his own words.

New York
I was born and raised in New York City. I was working as a waiter in one of the major hotel chains when I received an alarming phone call from one of my aunts. She informed me that my grandmother was terribly ill. My grandmother was the woman whom I considered to be my mother. I just had to go to Puerto Rico where she lived to see her.

Puerto Rico 1988
When I arrived on the island I was amazed by its beauty. After being there a few days my grandmother recuperated and I was able to make my brief visit a real vacation. Upon returning to New York City I found myself constantly thinking about Puerto Rico. Something was pulling me -- drawing me in like a magnet. I phoned my aunt out in PR and expressed to her my feelings. I told her that I wanted to come out and live on the island. She reminded me that the employment situation on the island was pitiful.

Without knowing why I lifted my roots. I either sold, or gave away, everything that I owned and headed towards the island. Even though it was the birth place of my parents I really didn't know PR. I was like a stranger in my own land. Even its roads were unfamiliar to me.

One of my cousins had heard over the radio about a job opening at a local night club. The waiters job suited me perfectly. I landed the job and bought myself an old jalopy of a car as a means of transportation to and from my new job.

Everything went fine until the night before Mother's Day. A few days before this event the same cousin who had helped me obtain my job called me up to ask a favor of me. She asked me to please photograph one of her favorite musical groups, which was going to be appearing at the night club where I was working.

The night before Mother's Day I arrived at the nightclub toting my cousin's 110 Instamatic Camera. The club was packed and I was barely able to snap some pictures of the musical group called "El Gran Combo." I managed to take a few. When the night was over I headed home. My feet were aching and all I could think at the time was about getting home and having something to eat.

I took the usual route home, the one which one of my other relatives had showed me to utilize going to and from the night club. I was driving very slowly. It was about 4:30 a.m. I had to keep in mind what some of my family members had warned me about; they said that while driving along these country roads one had to watch out for stray cows or horses that often wandered on to the roads. What they really should have warned me about was something else!

As I drove through this lonely stretch of unpopulated country road named "La Bajura" (literally translated means "the low part"), I came across a thick mass of fog, I didn't find this strange because I had encountered this cloud of fog other times on my way home from work. I slowed down even more so and kept my eyes on the road at all times. Suddenly I heard what I initially thought were the sounds of hooves on the paved road. Calves? The sound was coming from the left side, the driver's side, my side.

I turned my head towards where the sound was emanating from and to my great surprise what I saw in that moment changed my whole sense of reality. Jogging alongside my old car was a... midget? child? "What the ____ is it?", I remember thinking to myself. My mind was going wild. I didn't know what to think. Demons? "Oh, my God, it's a demons," I thought. I was scared beyond description. This thing was about three or four feet tall. It had a huge head and black bulging eyes. The eyes are what really freaked me out. The being looked at me with those black pools it had for eyes and it had a strange effect on me. This thing had eyes that seemed to penetrate my very being. They were like those of a Pekingese dog except a lot larger. Its skin was white, almost like if it were wearing clown makeup. The nose was a pugged one and the mouth was no more than a slit. It wore what seemed to be a small one piece suit; the color being olive green. What in hell was this? The farthest thing from my mind was that this strange creature was an extraterrestrial being. At that place in time I didn't think about space beings or UFOs. My mind did not ponder into those realms.

I didn't believe in UFOs so I didn't think about UFOs or their occupants. I was so frightened and nervous that when I attempted to speed away from the horror, instead of stepping on the accelerator I stepped on the brakes. When I was about to move on I see movement on the right hand side in front of my car. Coming in from the fog was that same creature. How could this be? I though. How did it get from where it was running beside my door to where it was located now? In those few precious moments in which I debated whether to run the thing over with my car something even more unexpected occurred. Someone or something opened my car door. I jerked my head to the left and then it was staring at me. There were two. Not one -- but two. I gasped and held tight to the steering wheel. My foot felt like lead on the brake pedal. Mentally I prayed to God and asked him to forgive my many sins. I urinated in my pants and helplessly passed out.

When I woke up I had no idea of my whereabouts. I was still seated in my car but I was no longer on the road. I found myself in a strange place where there were other cars. These other cars were empty. I distinctly remember looking around for a sign that would read "Exit." There were none in this place that looked like an underground parking lot. There were no doors that I could see; no windows either. The colors of the walls were a non metallic light gray. As I sat there confused and gripping the steering wheel, the thing appeared next to the drivers seat door -- mine. This time I did not hear it approach my car. I just happened to look towards my left in search of a way out and there it was. Those eyes! It reached out to me with its skinny arm. The hand, I noticed, had five fingers but they were all about the same length. With his white hand he, or it, touched me. He placed the palm of its tiny hand upon my forehead. With this action on the creatures behalf, I faded into darkness.

When I gained my mind I found myself seated in another room along with 14 other people. This room was also the same color as the previous one; a light gray. There were no light fixtures visible to the eye, yet the place was illuminated. I saw no doors or windows. The rest of the people looked as terrified as I felt. None of us spoke. Out of what seemed nowhere, from some point of departure behind us, walked in the two small beings and right behind them came a man.


This man was dressed in a black shirt and black pants. His shoes were of the same color. His skin was a dark tan complexion. Like the skin color of an Arab or a Hindu. He did not appear to be tall; maybe 5 feet 7 inches or so. He stood before us and the two small beings situated themselves -- one to his right, the other to his left. This man with long black shoulder length hair spoke to us in perfect Spanish. He claimed to be as human as we are but from a different planet, another world which rotates around an alien star (sun).

In this room the extraterrestrial human displayed to us all various projections which seemed to be totally real in appearance. At the end of these events, the small beings (the ones that the ET human had informed us were in fact made by his people) touched every one of us on the forehead. Everything went away and I awoke seated in my car.

It was now daylight outside and I was in a different area of my home town. At the time I didn't have any idea of where I was. I knew this was not the "Bajura Road." Where was I? I had woken up in a total state of confusion and I couldn't stop crying. The Bajura was a paved road and this was a dirt road.

The next thing I knew, I heard the roar of military jets flying above. When I looked out the window of my car I saw it for the first time. It was hovering without making a single sound. The F-14 Tomcats were on their way back. Like a zombie I took hold of my cousin's camera and found the disc-shaped object through the lens. I just stood there observing it through the lens when suddenly out of nowhere I started to hear a strange beeping sound. Automatically I would snap a photo on every second beep. Beep-beep-snap-beep-beep-snap.

The disc tilted itself at an odd angle and shot off straight into the sky. The jets flew into formation and they took off frustrated in their attempts to ground the alien aircraft.

After this experience my life was never the same. These photographs have brought me lots of grief. In the near future I hope to be able to publish my book which I'm now completing, where my experience in its totality will be described in depth. There are many wonderful things out there awaiting us, but let us not forget the many wonderful things that we have right here on earth... Amaury Rivera Toro

In 1991 I interviewed Amaury at the First international UFO Conference at the Riveria Hotel in Las Vegas,

I believe his account to be true, we had several consultations after the event was over, Amaury was very perplexed by the event; he also had pictures of the Aliens .....( FallenAngels )that to my knowledge  have never been revealed to this day