Matthew 7:15-20 You Will Know Them by Their Fruits

As Bean recently stated, i need to start a thread to vent my thoughts instead of flaming another thread into ashes.

Personally, I do not trust any politician so Trump and Hillary are on different faces of the same coin.

Here is what makes me feel that Trump is simply another cog in the works to usher in the Antichrist.

1) Chemtrails. Trump stated before election day that he was determined to get to the bottom of chemtrails. Since becoming President; silence.
Maybe its a shield to stop the enlarging Sun from invoking the Great Awakening.

You-tube has former US Lieutenant Colonel Roy Potter mentioning some interesting info concerning 'Wet-Ware' and why chemtrails are dimming the sun. If Roy mentions this and the popular TV series eRevolution got canned, how come Trump has said nothing on the same issue ?

Economist Magazine January 1988.
2) The democrats and republicans are the Old World Order. Both parties are designed to burn into the ground. Trump is an outsider linked to neither party.

Out of Chaos Comes Order. With the programmed self induced suicide of the old world order, it is only natural that the Nu World Order will rise out of it all like a phoenix.
Notice the year (2018) on the badge that the phoenix wears. BitCoin leading to a cashless society. 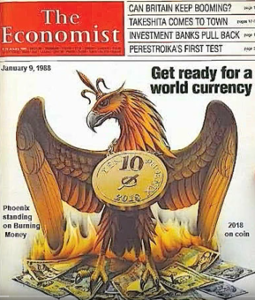 3) Remember Obama stating 'We Want Change'. Everyone naturally assumed it was change for the better. Well, history states otherwise.

Everyone wanted change and voted Trump into power. Again everyone assumes it will be for the better. i state it will be the opposite.

Blacks are getting jobs now as jobs return to USA. This will mean more people will gladly choose the Mammon and not Jesus.

5) Trump has been silent on the scalar weaponry used on those houses in California. He is also silent on the Artic blast that has covered almost all of USA.

If Trump has got Yahushua right behind him, what has he got to fear by speaking the truth about how the houses in California were burnt to ash yet nearby dry pine trees miraculously survived 100ft flames.

6) If Trump has got Yahushua right behind him, why not mention the fact the scalar weaponry was used on Fukushima to start Revelation 8:11 where a 1/3 of world water (Pacific Ocean) turns bitter (radioactive) ?

The Mark of the Beast in the forehead.

Where are the mental processes such as planning in a brain ? In the frontal-lobe or forehead. Control those thoughts via nanites and everyone becomes a zombie or one of the Hive.

8) The popular TV series 'eRevolution' got canned after many people joined the dots between nanites, chemtrails and all thoughts being monitored. The devil wants no privacy of thought.

9) Q says that the elitists are being taken to 'Gitmo' on unchartered private jets. Whats to say that they are not vanishing to D.U.M.B's instead, out of harms way before something bad happens on the surface or this Great Awakening stuns everyone ?

10) Pence just stated that the US Embassy will be moving to Jerusalem during the fall of 2019. This means that the 7 Year Tribulation has just been given the Green Light to probably start in 2020 during Trump's Presidency. We will see who is in power in 2020.

As you can see, i have my doubts about Trump being there for the peasants. i see him as a cleaner, cleaning up all the filth of the swamp ready to usher in the Antichrist who is programmed to be Mr-Goody-Two-Shoes.

That would never work, for so many reasons.

I agree. This proves that Q's statements are a waste of time.

Nothing is going to change in the short term. Without Divine intervention, 10 years from now, events will pretty much be the same as yesterday.

I am sure Hillary will STILL be on TV talk shows with a broken bone in her foot that never heals. Yet again, the frog in the bubbling cauldron has every reason to fall asleep. Nothing 'BIG' ever happens.

You having a bad idea in no way disproves Q, and the idea that it could, is completely void of logic.  People are doing something about the World.  And YHWH, IS helping. You act like none of this has happened before.

Don't wind up on the wrong side of history!  Best Wishes.

Remember this one over a week ago...

History is currently showing that Q lied about last week as nothing happened.

Who's to say for certain what kind of suicide?

how about political suicide?

how about career suicide?

how about financial suicide?

or, how about the weekend warrior suicide weekend where someone is up or working the entire weekend?

or maybe people who are better off dead DID commit suicide and it's just not reported?

The point is, no one except you is claiming anything irrational.  Everyone who is fighting to spread the truth about what the global elite have been doing, in a time where something is actually being done about it - those are the heroes right now.  Not the ones sitting on the sidelines arguing - they're just part of the problem.

My only advice to you, seeing as how you've been provided with a ton of resources already, is to read all the Q crumbs, read the Q map, read it all - before you decide you're an expert, because the alternative is just hypocritical.

You are actively working against a good thing here, so i'm going to bow out of this conversation as it does nothing except waste time that could be better spent red-pilling people who actually will wake up.

Fleet unrelated to escapes. Nowhere in the world to escape.
Unrelated to foreign invasion.
Stop INCOMING...
Navy loyal to The People.

WE are in control.