Now the serpent was more cunning than any beast of the field
that Yahuwah 'Elohiym had made - Genesis 3:1

The word "serpent", mentioned here, is translated from the word
nachash. This word can mean in the sense of a verb: to whisper,

prognosticate or enchant. As a noun it can mean an incantation,

an enchantment or a snake.It is of interest and importance to also

note that the same root is used to mean "copper" : nechuwshah

and the Chaldean word for "copper" (nechash)are virtually identical

to the word which is used for "serpent" in Genesis 3:1.

Was an actual snake involved in the temptation of Eve?

I have encountered, recently, quite a bit of material which supposes that

there was no involvement of any reptile in the events of Genesis 3. This view is

did not involve a literal tree nor any literal fruit. It is noted in this view that

the definition of the word "nachash" only associates serpents with the

meaning by way of attributing the primary definition to its character,

such as hissing and a sneaky, crafty nature.

trees and fruit, the use of the word nachash can be found throughout

be quite odd. An example would be Exodus 4:3 when Moses cast a rod upon

the ground and it became a serpent. YHWH commands him to then put forth

his hand and take the serpent by its tail. It's a logical conclusion, then,

that the word nachash is, at least at times, used to mean an actual,

about serpents throughout a wide array of cultures. Serpents, are perhaps,

the most heavily dealt with beasts in religious and mythological records.

They are seen as embodiments of evil, wisdom, luck, power, knowledge

and enchantment. Depicted in ancient art countless numbers of times,

they are often shown as an evil to be defeated or feared..as if mankind

had learned to associate their misfortune in life with this beast. Other

depictions actually portray a serpent with a tree and human beings

nearby....a scene very reminiscent of the description of events in 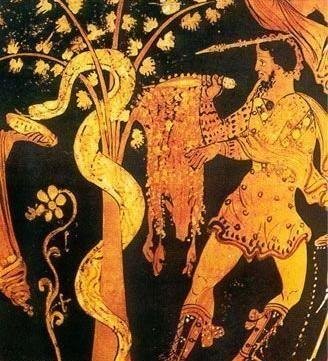 Some even depict serpents as having legs. Recall the curse put on the

serpent - "Because you have done this, you are cursed more than all

cattle and more than every beast of the field. You shall go on your belly

and you shall eat dust all the days of your life." Genesis 3:14

So then if we have the involvement of a real beast...how did this beast

a creature as his medium?

other animals. " Now the serpent was more cunning than any beast

of the field..." You might look at a modern snake crawling through your

own garden and not associate it with a great degree of intelligence, and

original created form both in appearance and brain power, but not only

did the serpent once have a very different form, it also had great intellect.

Though most might be accustomed to considering humans the only earthly

creatures with sentient intelligence and feel that this is directly connected

to mankind being created in YHWH's image...there is not an actual parallel

between human monopoly on intelligence and their unique design in His

the form of their Maker, both in appearance and in having an imperishable

and individual spirit. The serpent was not made in the image of YHWH

could yield to Satan.

other animal. YHWH created man in His image, but is man the only creature

who had a "model" they were created to resemble? Consider a particular

classification of angelic being called a Seraph. Seraphim are mentioned in

the English translation of the Bible in Isaiah: "Above it stood seraphim, each

The word in Hebrew - saraph means a fiery, burning creature identified with

a serpent and interestingly...copper. (refer back to the words nachash and

nechuwshah). The word saraph occurs also in Numbers 21:8 and is

a "fiery serpent". In Revelation, Satan is referred to as "that old serpent,

called the Devil and Satan" Revelation 12:9. If the animal known as a

to which Satan himself belongs, it is quite logical that he chose this beast

as the most suitable physical housing for himself.

Why didn't Satan himself manifest physically to Eve? Because he couldn't.

YHWH's will, he had no authority to breach the divide between the

spiritual and physical realms without the explicit consent to inhabit

a native, physical resident of earth.

Satan: The Originator of Sin

in Isaiah 14...i do not agree that these are the same individuals, but that

subject is for a different discussion. The bible does, however, provide an

understanding of his goals, his motives and when he initiated his rebellion.

serve Him...attempting to lay accusation against YHWH's servants in order

He behaves like a malicious prosecuting attorney, he can't supersede his

Creator's law so instead he attempts to work it to his ends...knowing that

the wages of sin are death, he seeks to demand the full penalty of breaking

the law when a person stumbles...and is not above tempting you to stumble

so he can. (Thank Yahushua for Mercy!)

In Revelation are these verses about him :

"And war broke out in the heaven. Miyka'el and his angels fought with the

dragon.And the dragon and his angels fought but they did not prevail nor was a

place found for them in heaven any longer. So the great dragon was cast out,

that serpent of old, called the Diablos and Satan, who deceives the whole world.

He was cast to the earth and his angels were cast out with him. Then I heard a

loud voice saying in the sky, "At this moment salvation and strength and the

kingdom of our 'Eloah and the power of His Anointed have come, for the accuser

of our brothers who accused them before our 'Eloah day and night, has been

This future event shows some of Satan's goals...he has a desire

to literally overthrow YHWH, His law and His will, to the (insane) point

he will even storm the "gates of heaven" and engage His faithful angels in battle.

Some will see this as a description of a past event, however it is clear by looking

throughout scripture that until this point, he brings before YHWH accusation

against believers and is denoted as the "prince of the power of the air"...

Satan was the original sinner...having been created (as were all creatures)

good, he conceived the antithesis of creation...destruction, in that he willfully

all creation...the natural consequence of that opposition is destruction...

the wages of sin were always death. In his dissent, he successfully lured

legions of other angelic beings into his vision of a universe without YHWH.

This event occurred before mankind existed, as obviously he was already in

a sinful state when he tempted Eve. This is the rebellion most believers are

familiar with, and it was the one which would set in course all other instances

of willful sin for all of time...but it might not be as well known that it wasn't