Tiny village is latest victim of the 'The hum'
It is a mysterious sound on the very edge of perception that has driven thousands of people around the world to distraction.
Now a tiny English village is the latest community to claim to be being hit by the phenomenon known as "the hum".
Residents of Woodland, in County Durham, claim that every night a noise permeates the air similar to the throb of a car engine.
It is sometimes so strong that it even shakes the bed of one of the householders.
But no matter how hard they look, the community cannot find the source of the problem and, at their wits end, have called in the council to investigate.
The 300-strong population is the latest around the world to be hit by the rumble which has in the past led to wild conspiracy theories blaming it on UFOs, government experiments and abandoned mine shafts.
It is so widespread that it has even featured on the television show The X Files.
It's most famous occurrence was in Bristol in the 1970s when more than a thousand people complained of the consistent drone causing nosebleeds, sleeplessness and headaches.
It vanished as mysteriously as it arrived and was never explained.
Residents of Woodland, a community consisting of one main street surrounded by farmland, claims their version of "the hum" is constant from midnight until 4am every night and stops them sleeping.
There are no pylons, factories or abandoned mines nearby.
The noise started about two months ago and has been plaguing the isolated village every day since.
Marylin Grech, 57, a retired store detective, said: "In certain areas of the house you can hear it more loudly. It is definitely from outside, it's in the air, all around, very faint.
"It vibrates through the house. We've turned all the electricity off in the house and we can still hear it, so it's not that.
"Sometimes we'll be in bed and it vibrates right through our bed, like a throbbing.
"It's not tinnitus, that's a high pitched sound and this is very low. If I put my fingers in my ears it stops, so I know it's not in my head.
"At 4am it's so clear, because we live in such an isolated place with no traffic, it's heaven.
"But it leaves a buzzing in your head for the rest of the day."
Gary Hutchinson, an environmental protection manager at Durham County Council, said: "I can confirm that we received a call regarding a humming sound in the Woodland area earlier on June 1 and we will now make further enquiries before deciding what action we will take."
http://www.telegraph.co.uk/news/uknews/8566281/Tiny-village-is-late...

Permalink Reply by Kathy on June 12, 2011 at 5:36pm
Some time ago, I remember being told that the Earth makes its own music. Music is different than a headache causing annoy noise. Although they do call Rap .....music.

AdminPermalink Reply by Bean on June 14, 2011 at 6:55pm
i think the hum could be related to underground facilities.. other than bases and labs, i've heard here and there that cities exist as well.. which i think makes sense if one considers that Satan has a perverted counterfeit for just about every good thing the Creator has.. the Creator put a population above ground.. it makes sense that Satan has put populations below ground.. there are eyewitness reports of the underground bases.. with the whistle-blowers typically 'suicided'.. like the guy who detailed the blue jumpsuit wearing children and other subterranean aspects of the underground portion of the Denver airport.. the one where all the creepy storm-trooper murals and masonic emblems are.

There will not be any whole nations saved during the tribulation. All nations will be complicit with the antichrist. His reign will be global.

The underground facilities Bean mentions will not be for use for believers. These are deep underground military bases and labs which are used for purposes that directly support the NWO agenda.

In fact Revelation speaks of the wicked rulers of the earth attempting to hide in these places to escape the wrath of our Savior.

And said to the mountains and rocks, Fall on us, and hide us from the face of him that sitteth on the throne, and from the wrath of the Lamb:"  - Revelation 6:15

Believers will have no need to escape the wrath by such means. He is our protection, but their doom.

If you have never seen the murals that are in Denver International Airport, here they are. They are blatant depictions of the NWO agenda and their goal of depopulation: 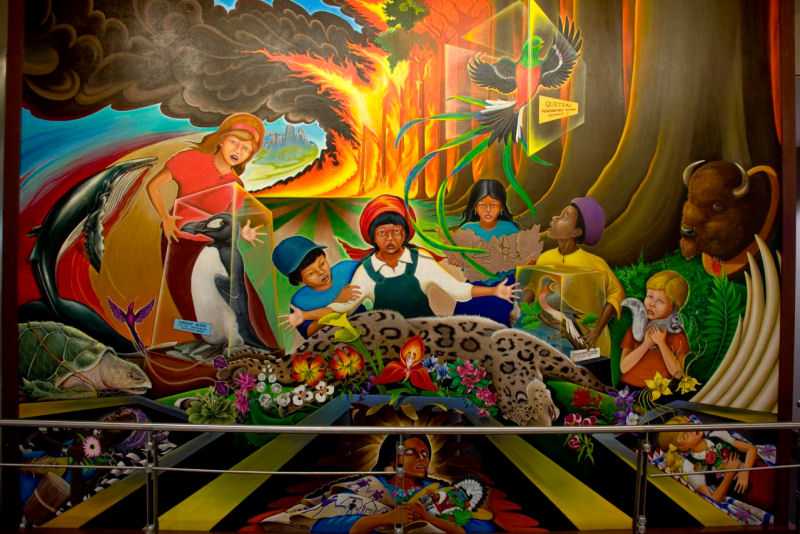 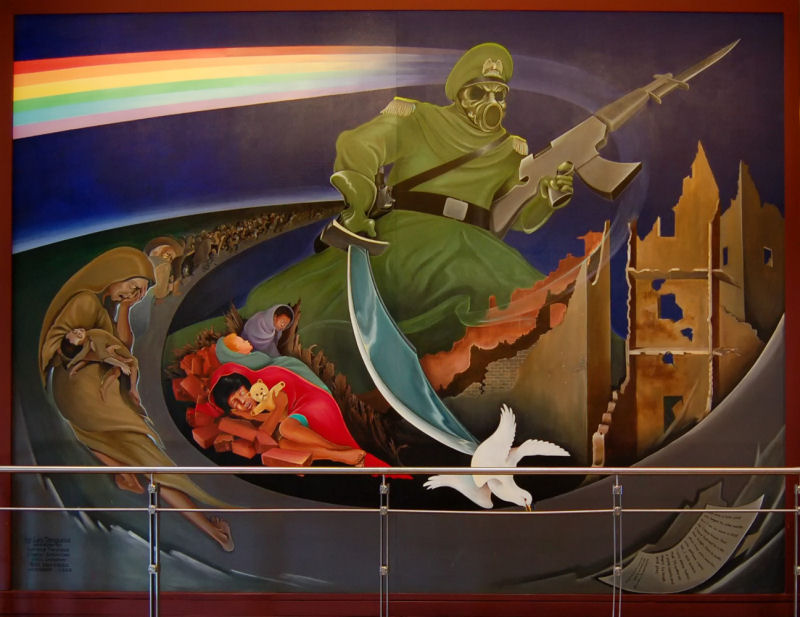 Larger image of paper with writing in the bottom right corner

Check out this video expose on DIA: http://timenolonger.ning.com/video/conspiracy-theories-what-s-up-wi...