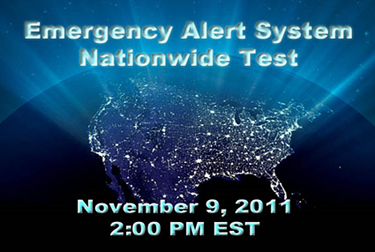 More technical details about the upcoming national EAS test are trickling out of the FCC.

For one thing, the commission is confirming that the test on Nov. 9 will last for about three minutes, something of an eternity in modern-day radio.

The FCC says that during the test, FEMA will originate a "live" Emergency Action Notification code to all EAS participants, including radio and TV stations, cable systems, Sirius XM, satellite TV providers and wireline video service providers. As part of the test, the public will be told the EAS has been activated for a national emergency, along with an audible notice that "this is a test."

The commission and FEMA, along with stations and cable providers, are working on outreach efforts to inform the public to avoid panic about the test.

There’s also been a lot of debate within engineering circles about how the test will conclude.

The FCC’s Public Safety and Homeland Security Bureau says the test will end with transmission of the End of Message code, not the Emergency Action Termination code. The bureau says equipment manufacturers have told the commission that by using the EOM, stations won’t need to reconfigure their EAS encoder/decoders to receive and air the test.

Washington, D.C.’s location code will be the origination code for the EAS test. This, too, has been a question for station engineers, since FEMA previously had said there’s no national EAS location code. The FCC’s Public Safety and Homeland Security Bureau believes most EAS encoder/decoders will automatically forward the EAN with the Washington code and not require further configuration. However the commission recommends that stations that aren’t sure whether their device will forward an EAN with the Washington code to contact their manufacturer or FEMA’s Integrated Public Alert and Warning System Office via email to IPAWS@dhs.gov.

The bureau intends to provide more information before the test.

Tristan, wow... the people I know are Christians who some used to and some still do study with Shepherds Chapel .  But they see them and 44's and stuff they write about it being a constant thing or for a while they all did.  I posted something at their website.  No one there had posted any kind of thing. I don't see em. I saw the skulls, but I don't listen to many of the "out theres" lately.  thanks for bringing me up to date.

Prodigal that make so much sense.

"This March 8th, the FBI is planning to unplug DNS servers it set up to help eliminate malware from over half of Fortune 500 companies and government agencies still infected in early 2012.

The change could potentially leave a great number of Internet users without access to the Web.
InfoWorld reports:

…the feds replaced the criminals’ servers with clean ones that would push along traffic to its intended destination. Without the surrogate servers in place, infected PCs would have continued trying to send requests to aim at the now-unplugged rogue servers, resulting in DNS errors.

The malware, called DNSChanger Trojan, is said to illegally redirect traffic and prevent users from accessing the updates necessary to remove it. Without access to these critical patches, these large companies, government agencies, and home users are said to be more susceptible to hackers.

This prompted InfoWorld to wonder:

This fact does raise the question of why so many Fortune 500 companies and government agencies have failed to notice they have a problem, as they presumably have IT security professionals on staff who should be monitoring such incidents."