Earthquake off Indonesia's Aceh triggers tsunami alert
An earthquake of magnitude 7.4 has struck offshore near the Indonesian island of Sumatra, near Aceh province.
The quake struck 214km (133 miles) south of Aceh's capital of Banda Aceh, the US Geological Survey (USGS) said.
A local tsunami alert was issued and later lifted by the Pacific Tsunami Warning Center.
The site is very near that of 2004's 9.2 magnitude earthquake. About 220,000 people were killed in the Indian Ocean tsunami the quake triggered.
The epicentre of the latest quake was at a depth of 61.4km, about 66km (41 miles) south-west of Meulaboh district, the USGS said.
The district, and other parts of Aceh, were devastated in the 26 December 2004 earthquake.
Ring of Fire
The quake hit at 1259 (0559 GMT). Local media reported some houses were damaged and power lines knocked down, Associated Press news agency said.
The Pacific Tsunami Warning Center lifted its tsunami watch several hours after the earthquake.

The earthquake caused some panic in parts of Aceh
"Sea level readings indicate that a significant tsunami was not generated," the Hawaii-based centre said in a statement on its website.
"Therefore, the tsunami watch issued by this center is now cancelled."
The USGS earlier said it believed there was no threat of a destructive, widespread tsunami but the possibility of a local tsunami existed.
Indonesia is located on the volatile Pacific Ring of Fire, a belt of tectonic activity girdling the Pacific Ocean that triggers earthquakes and volcanic activity.
Aceh is on the north-western tip of Sumatra, one of Indonesia's main islands, and is frequently rocked by earthquakes.
One last year near Padang in West Sumatra province killed more than 1,000 people.
About 170,000 people were killed in Aceh from the 2004 earthquake and the tsunami it launched.
The waves spread across the Indian Ocean to cause death and destruction as far away as Sri Lanka, Burma and Thailand.
http://news.bbc.co.uk/2/hi/asia-pacific/8670593.stm

Permalink Reply by Kathy on October 13, 2011 at 4:34pm
USGS Reports Record Number Of Strong Earthquakes In 2011
The number of dangerous earthquakes recorded worldwide so far in 2011 has reached record new levels, according to research conducted by iWeather Online (IWO).
By analysing data from the US Geological Survey (USGS), IWO was able to determine that earthquake activity (6.0-9.9 magnitude) during the period 01 January to 12 October 2011 reached its highest level in 20 years. The 2011 data was compared with data for the corresponding period in each of the 19 previous years since 1992.
A total of 177 earthquakes in the range 6.0 to 10 magnitude on the Richter Scale have been recorded so far in 2011, compared to 149 for the same period in 2010 and 119 in 2009.
Recent earthquakes exceeding 6 magnitude on the Richter Scale have occurred in Tonga (08 Oct), northern Argentina (06 Oct), India/Nepal (18 Oct), Cuba (15 Sept), northern Sumatra (05 Sept), Vanuatu (03 Sept), Alaska (02 Sept), and East Timor (30 Aug).
Interestingly, the total number of earthquakes (magnitude 0-9.9 magnitude) recorded in 2011 is dramatically lower than the previous four years since 2007.
The highest number of earthquakes recorded in the period 01 January to 12 October during these years was 23,980 (2008). Only 9,506 earthquakes have been detected by the USGS in 2011 to date.
Meanwhile, unusual earthquake activity has also been detected in other parts of the world during 2011 (click location for full story):
- More than 10,000 earthquakes have been detected by Spain’s Instituto Geográfico Nacional (IGN) around the island of El Hierro since 17 July.
- In late August/early September, the Geophysical Institute, Academy of Sciences of the Czech Republic recorded 10,000 earthquakes in the Nový Kostel area of the Cheb District, a region located close to the Czech Republic’s western border with Germany.
- The Atlantic region of Bermuda, which was hit by its first earthquake in over a decade in April, was rattled by two moderate quakes in early October
- A rare moderate earthquake struck the Northwest Territories region of Canada on 26 September
- Ottawa was shaken by a rare 4 magnitude earthquake on 18 September
- Holland experienced a 4.3 magnitude quake on 08 September
- One of the strongest earthquakes to strike the U.S. East Coast in decades rocked buildings as far as North Carolina and Canada on 23 August, causing damage to buildings and a number of injuries.
- A magnitude 2.9 earthquake, followed by at least six earth tremors, was recorded in western Scotland on 21 August.
- Georgia was struck by a magnitude 5.1 earthquake on 18 August, the strongest earthquake to hit the eastern European nation in almost two years.
- A relatively rare, moderate earthquake struck near the coast of Israel and the Gaza Strip on 07 August.
- A 4.8 magnitude earthquake shook the northern Italian city of Turin, as well as parts of neighbouring France, Monaco and Switzerland, on 25 July.
- A moderate earthquake struck in the English Channel on 14 July. The shallow 4.5 magnitude earthquake struck at 6:59 a.m. GMT. at a depth of 15km in waters between Portsmouth, England, and Le Harve France.
- A moderate earthquake struck near the Nabro volcano in Eritrea on 17 July, five days after the stratovolcano erupted for the first time in recorded history.
- A rare 4.6 magnitude earthquake struck Australia, just 97 km southeast of Melbourne and 24 km SW of Warragul, on 05 July.
- A 5.5 magnitude earthquake struck the South Sandwich Islands region, situated around 750km south east of South Georgia, in the South Atlantic on 19 June. It was the latest in a series of quakes to hit the Antarctic Region during a 24-hour period.
- Two moderate earthquakes, measuring 5.2 and 4.5 on the Richter Scale, struck Spain on 11 May, killing 10 people.
- 2011 also has been a very active year for the Pacific Ring of Fire
The massive earthquakes in Japan (2011), Chile (2010), Sichuan (2008), Sumatra (2005 and 2008) and Indonesia (2004) have served to remind us of the devastating impact of earthquakes on life and property.
While the number of earthquakes ranging between 8.0 magnitude and 9.9 magnitude have shown no significant increases in recent years, the number of earthquakes ranging 6.0 magnitude to 7.9 magnitude is rising and reached a 20-year high in 2011.
While considered moderate to strong on the Richter Scale and far less severe than 5-6 magnitude quakes, earthquakes in this range can still cause widespread damage and loss of life. Some well known examples include Haiti in 2010 (7 mag), San Francisco Bay, California, USA, in 1989 (6.9 mag), Caracas, Venezuela, in 1965 (6.5 mag), Christchurch, New Zealand, in 2011 (6.3 mag), L’Aquila, Italy in 2009 (5.8 mag), and Newcastle , Australia, in 1989 (5.6 mag).
For more on this article.....
http://www.irishweatheronline.com/news/earth-science/geology/usgs-r...

This event has been reviewed by a seismologist.

Just an interesting side note on this quake,

"Malia, 13, is on vacation with a school group in Oaxaca in southwestern Mexico, according to reports from the region. The U.S. Geological Survey says the initial 7.6-magnitude earthquake was felt strongly in Oaxaca (wuh-HAH'-kah). The quake was followed by an aftershock that shook southern Mexico, swayed buildings in Mexico City and sent frightened workers and residents into the streets."

Magnitude 8.7 - OFF THE WEST COAST OF NORTHERN SUMATRA


BANDA ACEH, Indonesia (AP) - A tsunami watch was issued for countries across the Indian Ocean after a large earthquake hit waters off Indonesia on Wednesday, triggering widespread panic as residents along coastlines fled to high ground in cars and on the backs of motorcycles.

Some were crying. Others screamed "God as great" as they poured from their homes.

The U.S. Geological Survey said the 8.7-magnitude quake was centered 20 miles (33 kilometers) beneath the ocean floor around 269 miles (434 kilometers) from Aceh's provincial capital.

A tsunami watch means there is the potential for a tsunami, not that one is imminent.

Said, an official at Indonesia's Meteorology and Geophysics Agency who goes by only one name, said a tsunami warning has been issued for cities all along the coast of Sumatra island.

There was chaos in the streets, with fierce shaking continuing for nearly four minutes.

"I was in the shower on the fifth floor of my hotel," Timbang Pangaribuan told El Shinta radio from the city of Medan. "We all ran out. ... We're all standing outside now."

He said one guest was injured when he jumped from the window of his room.

The tremor was felt in Singapore, Thailand, Bangladesh, Malaysia and India. High-rise apartments and offices on Malaysia's west coast shook for at least a minute.

Thailand's National Disaster Warning Center issued an evacuation order to residents in six provinces along the country's west coast, including the popular tourist destinations of Phuket, Krabi and Phang-Nga.

Indonesia straddles a series of fault lines that makes the vast island nation prone to volcanic and seismic activity.

A leading earthquake scientist has warned that the planet could be cracking up after a series of massive quakes in just 48 hours.

The series started with two massive quakes in Indonesia measuring 8.6 and 8.2 on the Richter scale rapidly followed by three more only slightly smaller in Mexico within hours.

"There is no doubt that something is seriously wrong. There have been too many strong earthquakes," said Marmureanu.

He added: "The quakes are a surprise that cannot be easily explained by current scientific knowledge. With the Indonesian quake for example, statistically, there should be one big earthquake in this part of Asia every 500 years. However, since 2004, there were already three quakes with a magnitude of over 8, which is not normal. 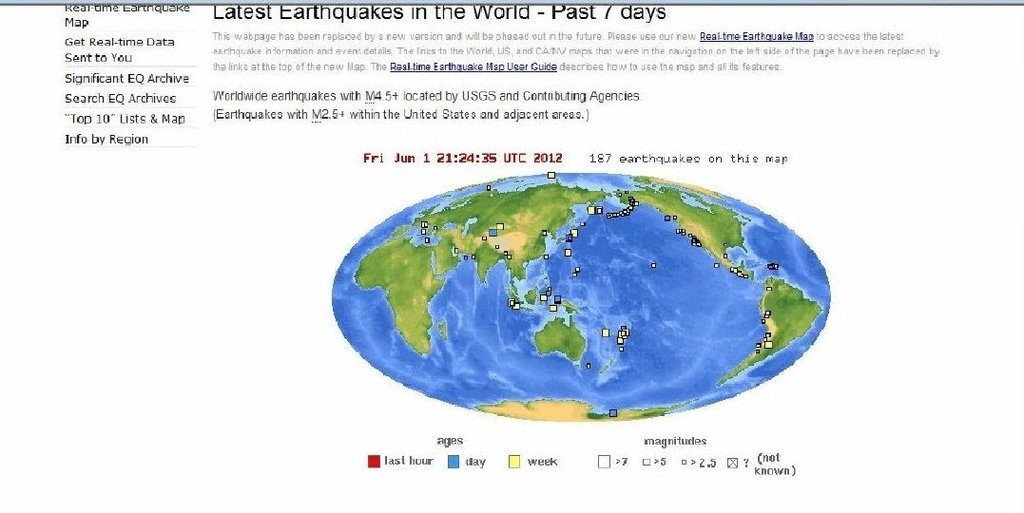 Magnitude 7.6 - OFF THE COAST OF COSTA RICA