As the virus spreads in California, officials reassurances are falling short. How far will the pandemic go? Will it be the end of Trump? The beginning of for...

I agree with the assessment that this is an attack by the Cabal targeting the nationalist movements around the world. They definitely plan to tank the stock market. They'd love to dampen the spirits of those who were hoping to shake off globalism with something that will scare them into submission. And they definitely are expressing great irritation at the fact that Trump won't freak out about it.

Here's a gem of a bit of info. This right here might be worth a thousand Chinese "raw videos" and all the theories in the world.  - https://theconservativetreehouse.com/2020/02/25/odd-coincidence-rog...

Rod Rosenstein's sister. How about that. She's a major driving force behind the command to panic. What if suggested panic is all they really have? The Cabal has historically ruled society with 1% action and 90% illusion. Consent of the governed.

The Ice Age farmer guy is pretty convinced that the Cabal will succeed in doing this but i'm going to venture an opposite opinion. I think they won't. I think that in answer to the command to panic and the optics to seem like we're being pro-active, our factories will make "all the things". The masks, the hand wipes, the what have you. We'll avoid the market tanking because industry will be busy making these things for a short time. The vaccine will be made, but never become mandatory and won't even really catch on as something most will do.

As media continues to become more alarmist, people will start thinking it all sounds a little put on. The command to panic will backfire. No consent will be given. The virus - whether real, or fake or amped up by 5g will fizzle out and die with a whimper sometime in Spring.

Ok, that's a bold prediction, but let's see what happens.

Bold indeed.  Idk if he's sold on it.  But I know that he puts lots of emphasis on people creating solutions to these problems as opposed to just caving in to fear or relying on the government.  He seems like a pretty proactive and hopeful guy.

I hope you're right.  I think 2020 is gonna be a ride.  Interesting times to say the least.

The Pope is apparently very sick now. On Ash Wednesday i thought "does he have the coronavirus"? It's looking more like that's the case. I'm not going to be surprised if he dies. Some Iranian government officials are pretty sick as well. One has died. I'm sure finding this interesting that a disease that is affecting the general populace in these countries in some small percentage is having a disproportionate toll on the leadership.

does it seem contrived to you?  I mean...he is coughing and blowing his nose in public.  Everywhere else, ppl are going around with masks.  If he were truly ill and knows that he has been exposed to the virus, it seems he would know or be advised to stay home?  I find it hard to believe that he would so recklessly expose others...It is difficult for me to get a handle on what's going on here.  So much conflicting information.

Now the Vatican is assuring us that he's not sick at all, meanwhile in Iran 20-some parliament members allegedly have it. Weird things are afoot.

He looked like he was spreading some kind of very real cooties all over people Ash Wednesday. I don't really think the Pope would care too much if he got them sick, to be honest. And those that go up to see him probably think he's to holy to spread germs.

Well at least we're not living in boring times! Hats off to that. 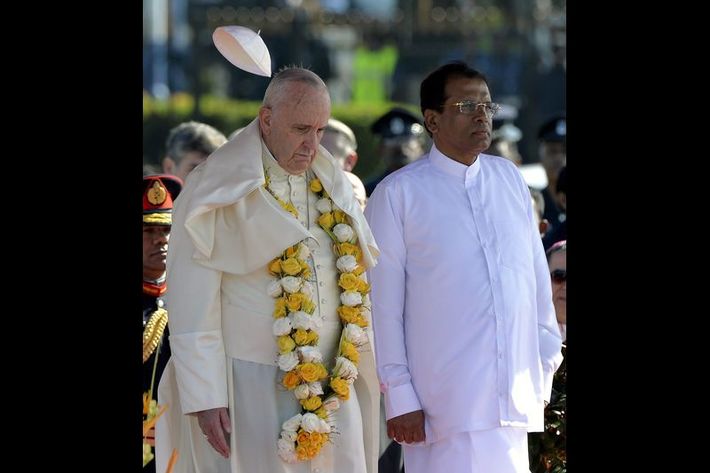 The ash will not stop the virus from spreading these pope can do nothing in short he has no spirit for stopping these virus.

These masks are they controlling the coughing or the virus?

haha, look at that thing take off. Italy spotted a UFO that day.

The masks supposedly stop people from spreading the virus but i know most of those things on shelves do not really stop fine particles and microbes from passing through.